Things have definitely been busy for us here in Folkstarland this fall. We’re sad to see the summer go, especially since we only managed to make it to the beach a few times, but there is so much excitement in store for us (and you!) this winter that we can’t be mopey for too long.

First, if you haven’t seen our music video, you must! We walked all over Wilmington trailed by cameras just for you! And if you’ve already seen it, watch it again! Go ahead, I’ll wait. 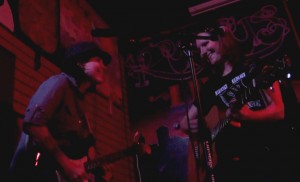 Ok, now for the recap part! We knew we were going to rock Raleigh when we traveled there to play, but what actually happened exceeded our expectations and then some. It’s always tricky being a musician in a town that isn’t your own, playing in places you’ve never played. You don’t know what the equipment or the crowd is going to be like, and no matter how prepared you are there are just certain things that you have to leave to the fates in the moment. 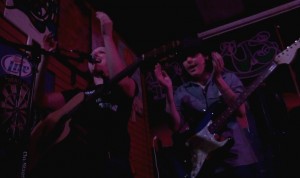 The fates were definitely on our side. We played a stellar show at Ruckus Pizza and Bar on Friday night. We tried out our brand new speakers, and we’ve never sounded better. Bobby Bryson got the crowd warmed up doing some covers and originals acoustic style. Then Folkstar took the tiny stage and completely tore the roof off. It was such a blast. The rush of walking into an unfamiliar place where nobody knows you and then playing the best show you can possibly play is an amazing feeling. 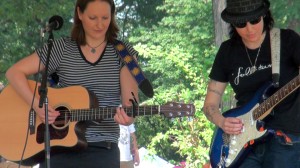 Saturday was a picture perfect pre-autumn day. While Sue is not a morning person under any circumstances, even she had to admit that we couldn’t have asked for better weather for a day gig. When we arrived at the North Carolina State Fairgrounds for the NC Pagan Pride Festival, we unloaded our gear and prepared for our set. We were immediately struck by how extremely friendly and laid back everyone was. Ric helped us carry our equipment, and Daddio kept everything running. We were even surprised by a few of our Wilmington peeps who showed up to enjoy the day and cheer us on.Thanks to Melanie and Cathy for bringing the hometown pride!

The kindness continued through and after our set. We talked to a lot of great people, signed new fans up for our mailing list, sold some merch, and still managed to find time to enjoy the festival. I’m very pleased with the soy candle I purchased for only $3. $3!!! In an awesome decorative holder!!! Sue found a very cool pagan rosary with a tree charm at the end.

After bidding goodbye to our new friends, we loaded up and headed back into town. We arrived at The Black Flower early enough to meet Eric Strickland and The B Sides and also do a soundcheck. Ah, soundcheck. I so often rush through soundcheck because we’re usually doing it right before we take the stage for real. I just get so excited to start. Sue will vouch for this. However, to her relief, we got to soundcheck thoroughly and early. Jamie was the best soundman I’ve worked with probably ever. He had us sounding like heaven in probably 5 minutes flat and it was so nice to not have to rush but still have someone know what they were doing so that we weren’t there for hours and hours. 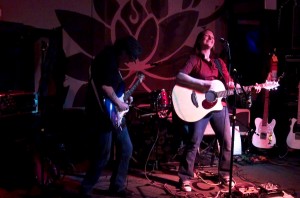 So we were feeling pretty good going into the show. I’ll admit that we were both a little bit nervous. We never foresaw ourselves opening for a country band. We’re a little folky, sure, but we’re a little bit more on the rock side of things. I had no idea how we were going to go over with this crowd. Clearly, I worry too much. We played the best set we’ve ever played and won over a room full of strangers. A room full of strangers who love country music! And they loved us!

The other bands were awesome too. Eric Strickland and The B Sides were nice guys and really polished musicians. Gary Braddy is my new hero for totally giving me the rockstar treatment when I broke a string. The moment the song was over, his acoustic guitar (fully tuned and everything!) was in my hands and my acoustic was in his, while he and Eric changed the broken string. By the time I finished the next song, I had my guitar back with a fresh string (again, fully tuned!) and I didn’t have to go through the awkward show-stopper of changing a string on stage. The whole thing was pretty epic.

We later met late arrivals The Shucks and they were super nice too. We didn’t get to stay for their set, however, (sorry, guys!) because we were about to pass out from exhaustion after 3 shows in 2 days. Playing the shows was tiring, but the loading and unloading was perhaps the most exhausting part. This rockstar stuff is a lot of work! But it is also a lot of fun too! 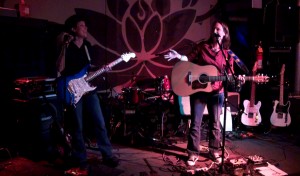 A huge, ginormous thank you goes out to Andy Washburn at NC Local Music for booking and promoting our shows and for just being an altogether awesome person. Andy works his ass off and has a love of music like no one else. He is constantly putting together stellar concerts and it’s an honor to share the love of music with him. Go to http://nclocalmusic.com or http://www.facebook.com/NCLocalMusic, check out the regular rotation of shows, and you will be totally happy you did.

Thanks also to everyone who gave us a proper Raleigh welcome. Thanks for talking to us, taking postcards, buying merch, and liking us on Facebook. We’re looking to play another show or two before the end of the year, at which point we’ll focus our attention on the next album. That’s right! The new album will be out in 2013! We’re also halfway through our radio campaign and are excited to see where our music is being played across the country. Although the fall tour didn’t work out (coordinating schedules is a very headache-inducing process) we’re working out some dates for the spring.

Keep stopping by the blog, our Facebook page, and our Twitter. Also, be sure to visit our record label Karmic Fury Records. And put on a sweatshirt over that Folkstar t-shirt so you don’t catch cold!